Near East University’s New Building of the Faculty of Health Sciences and İrfan Günsel Congress Center opened with a Grand Ceremony
Professor Dr. Ümit HASSAN: “We take the lead in education and health …”

Delivering the first remarks of the opening ceremony, Near East University Rector Professor Ümit HASSAN underlined that their projections for the leading role in education and health had been undertaken as a mission.

He also highlighted that the Founding Rector Dr. GÜNSEL’s initiative and his devotion to his country had a crucial role in realizing significant developments in education, science, sports, and health as well as to provide these services within professional and moral ethic.

Near East University’s New Building of the Faculty of Health Sciences and İrfan Günsel Congress Center opened with a Grand Ceremony
Assoc. Prof. Dr. İrfan GÜNSEL: “We are on the way to be a leader in world medicine….”

Addressing the attending body at the ceremony, Near East University Board of Trustees Chairman Assoc. Prof. Dr. İrfan S. GÜNSEL underlined how they are, as Günsel’s family, devoted to continuing to invest in new facilities to provide the best services in all domains of education, science, sports, health and in other relevant fields. “As Günsel’s family, we are always aware of the significance of preserving the national values. By rooting on these lands, to which we are deeply bound up with a great love, we will continue to come up with great breakthroughs” said he.

Touching upon the significant role of their accomplishments in the fields of health, education, science, sports, culture and economy in removing the artificial borders and embargos, Assoc. Prof. Dr. GÜNSEL highlighted their commitment to continuing to provide the highest quality education and services required to design the future and reach the future.

“As islanders, we leave our mark on the continents….”

Reminding that they set a foot on this road with the slogan “Living a continental life on the island”, Assoc. Prof. Dr. İrfan GÜNSEL pointed out that it was the most overriding goal to leave our island’s mark on the continent and to continue to be a model for the world. Stating that they had realized outstanding accomplishments in the fields of education, sports and health exceeding the boundaries of our country, GÜNSEL indicated that they were mobilized to rooting hereabouts.

Expressing that the newly established building of Faculty of Health Sciences was equipped with high-end labs and technology would provide all possibilities to raise well equipped health professionals, Assoc. Prof. Dr. İrfan GÜNSEL noted. “İrfan Günsel Congress Center will be the new address for local, national and international meetings on many issues concerned with science, social sciences, medicine, culture, economy and relevant fields”.

İrfan Günsel, my deceased grandfather, was a very special person, who always attached importance on education, wanted everyone to be educated in the best way, encouraged young people to go after new opportunities and their dreams, believed in science and thought that it should be further developed. “With the national and international meetings, scientific studies, projects touching the life, and activities inspiring young generations, İrfan Günsel Congress Center will be a center where his ideas are turned into reality” said he.

“With an educational understanding to create information and present this information for use of society, Near East University is a third Generation University that has taken it as a mission to transform the society via production of the scientific studies that carried out on R&D and innovation. 134 health related projects are currently carried out within the university. The number of our articles published in the field of health is in an increasing trend. 1500 articles are projected for 2018 and I firmly believe that we will achieve that as well” noted he.

Stating that they would continue to grow by rooting in these lands to integrate the people of Turkish Republic of Northern Cyprus with the world by assimilating into the universal values, Assoc. Prof. Dr. İrfan GÜNSEL concluded his remarks: “These two facilities that we are realizing their grand openings now are concrete indicators that we are deep-rooted on these lands. I would like to extend my best wishes for both facilities”.

Underlining their commitment to continue to provide quality health education in compliance with standards and criteria set by national and international bodies, Professor YÜCECAN expressed her views: ” With its 16 departments an 24 well-designed programs, Faculty of Health Sciences aims to be a leading educational institution capable to raise highly equipped health professionals, to generate information and technology and to pave the way for TRNC to go beyond the contemporary civilization level”. Touching upon the crucial role of high-end devices and equipment in offering education beyond the world’s standards, Prof. Dr. YÜCECAN highlighted that they had brought together the innovations of technology at both İrfan Günsel Congress Center and Faculty of Health Sciences.

Explaining that they were aiming to raise health professionals capable to achieve international accomplishments, Professor YÜCECAN said that the Faculty of Health Sciences with its competent staff and high tech equipped labs had all possibilities to pave the way towards these accomplishments.

Underlining the crucial role of teaching staff and educational models in ensuring success in education, Professor YÜCECAN stated that they implemented well-designed programs based on student-oriented interactive education model. “Equipped with self-esteem, confidence and responsibility, strong professional knowledge and ethic, skills required for critical and creative thinking, our competent staff, who are prone to learning and research, are devoted to accommodate the educational needs of students and pave the way for them towards the future” said she.

Addressing the attending body at the ceremony, the Health Minister SUCUOĞLU stated that Near East University with its medicine faculty, hospital and dental hospital had taken great steps under its dominant health guidance in private health in our country.

Highlighting that they, as the state, provided every kind of support to the health issues, Health Minister SUCUOĞLU stated that they signed protocols that enabled the patients to receive treatment in the country without having the need of seeking treatment options abroad.

Faiz SUCUOĞLU, who stated his belief in the establishment of the targeted health system under the new legislation, pointed to the significance of health tourism: “Developed countries spend a lot of time on health tourism and devote considerable resources to launch infrastructure. With the establishment of the medicine faculties, hospitals and dental hospitals of Near East University and University of Kyrenia, the infrastructure problem has been overcome. Each of these facilities with its fully equipped infrastructure is also an investment in health tourism. These investments, which are intensely in an increasing trend, will pave the way for our country towards being a destination for health tourism.” said he.

Pointing to the high-end equipped infrastructure of the Faculty of Healt Sciences, Minister SUCUOĞLU shared his views: “This new facility will raise well equipped health professionals capable to accommodate the technical personnel need required in health facilities. Without any doubt, the students, who will be raised through education programs that comply with world standards, will develop a cutting-edge professional career. I would like to wish luck and success with my best wishes” said he.

Near East University’s New Building of the Faculty of Health Sciences and İrfan Günsel Congress Center opened with a Grand Ceremony
CTP Leader Tufan ERHURMAN: “Near East University fulfills the health service that is the basic public service …”

Delivering a speech at the ceremony, the main opponent party CTP Leader Tufan ERHURMAN stated that Near East University fulfills the requirements of health services,, which is one of the basic public services.

Touching upon the significance of the investments made by universities and private sector despite the trials and tribulations experienced by the state, Tufan ERHURMAN underlined that the accomplishments that achieved on an individual basis were transformed into a social vision in the miraculous field that created under the lead of Near East University Founding Rector Dr. Suat GÜNSEL. “In this regard, the Faculty of Health Sciences and İrfan Günsel Congress Center are important” said he.

Indicating that such investments would enable the Turkish Cypriot people to continue to receive quality services, ERHURMAN stated that a desirable dignified society structure could be achieved consequently. ERHURMAN concluded his remarks by wishing good luck and success.

Delivering the final speech at the ceremony, the 3rd President Derviş EROĞLU underlined that every foundation that laid in TRNC rooted the base of this country.

Stating that employment was one of the most important challenges encountered in Turkish Republic of Northern Cyprus, Dr. EROĞLU highlighted the crucial role of investments in ensuring employment opportunities. “Investing needs devotion and courage. Under the lead of the Founding Rector Dr. Suat GÜNSEL, Near East University has always come up with great investments to promote our country and make its name known across the globe. Near East University with its contemporary medicine faculty, health sciences faculty, hospitals and congress centers is an educational institution that offers quality education in compliance with world standards” said he.

Celebrating Near East University, which has thousands of scientific publications, Dervis EROĞLU said that the 10-storey building of the Faculty of Health Sciences, equipped with high technology, provided an excellent environment for health education by bringing together complementary health departments under one roof.

Qualifying the irfan Günsel Congress Center, located in the building of Faculty of Health Sciences, as a son’s fidelity and adherence to his father, EROĞLU extended his appreciations to those who exerted effort for the investments. He concluded his remarks by wishing good luck and success.

Taking the stage once again after the opening speeches, Near East University Rector Prof. Dr. Ümit HASSAN commemorated İrfan Günsel, father of the Founding Rector Dr. Suat GÜNSEL, with emotional remarks by underlining that İrfan Günsel Congress Center, located in the Building of Faculty of Health Sciences, was brought into service to make the name of the decedent eternal.

“There are a lot to learn about the decedent İrfan Günsel for those, who do not know him closely. İrfan Günsel was not only the ancestor of Günsel’s family but also a great mentor that blended and guided the Near East community with his experiences and great wisdom” noted he.

Touching upon the decedent’s enthusiasm in nature, Professor HASSAN shared his views: “The decedent İrfan Günsel was deeply in love with nature. This love manifested itself in all of his remarks, behaviors and creative activities. To have a look at the window shades of his house is enough to give you an idea about this spirit of togetherness with nature that lies in his heart”.

Sharing one of his memories, Professor HASSAN indicated that the decedent told his fellows that the trees that they planted in the campus area would turn into woods by time and he would be listening to the sounds of trees. “The decedent, to whom the name İrfan befitted fully, thanks God that, also heard that the sound of trees mixed with the voices of thousands and thousands of young students” said he.

Prof. Dr. Ümit HASSAN concluded his words by underlining that the Founding Rector had taken the torch from his father and covered significant steps towards ensuring development in education, science, health, sports, culture and economy and in other relevant fields.

Following the speeches, the opening ribbon was cut off with the participation of the protocol. After the opening ceremony, the attendants toured the building of the Faculty of Health Sciences and İrfan Günsel Congress Center. 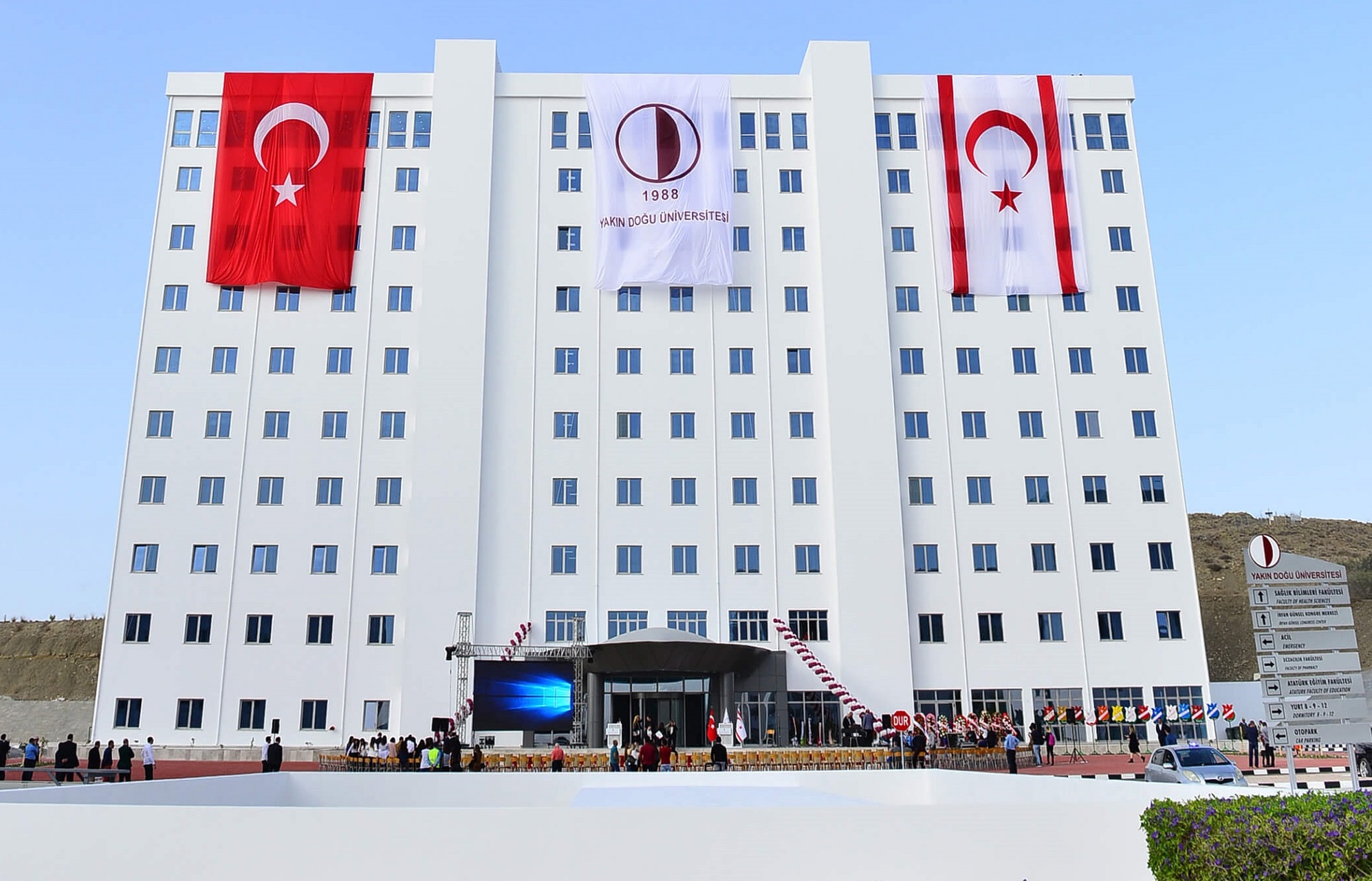